Island hinges on two absences: that of the artist, who was invited to the Havana Biennial without funding for him to make the trip, and that of the Russian film Soy Cuba (1964), which served as a starting point for the project. Mohamed Bourouissa asked Estrella Díaz, from Cuba, to collect on location the observations of her students as well as the recollections of one of the film’s actresses and of its scriptwriter. In place of filmed images, the artist produced a set of sketches that he animated and paired with Díaz’s audio recordings, interspersed with brief extracts from Soy Cuba’s soundtrack. He imagined these Cuban commentators of different generations chatting around a table, as in one of the film’s scenes.

Island, video black and white, sound, 11’47’’ © Mohamed Bourouissa ADAGP
Produced on the occasion of Between The Idea and Experience, 12th Havana Biennal 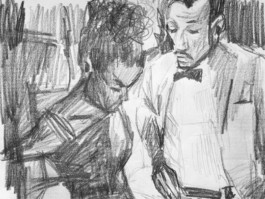