The word “Ara,” very popular in Marseille, is the prerogative of lookouts posted around drug dealers’ stomping grounds. They call out “Ara” to warn of the arrival of the police and keep the dealers from getting nicked. On the occasion of Manifesta, Mohamed Bourouissa appropriated this almost incantatory formula, twisting it to his own purposes in a sound piece that is both poetic and political. Transformed, distorted to the point of being inaudible, the locution becomes abstract, turns into altogether different, blending the concept of concrete poetry with the aesthetic form of rap. It is a tune, a bird call that must be understood as an alarm. Taking note of the climate of hyper-control constitutive of the violence widespread in contemporary societies, the artist reverses the codes, turning the lookout’s signal to flee into a wake-up call. The word, stretched to the extreme, becomes a simple sound, supremely minimal. Repeated like a mantra, it induces a form of trance and awakens an ancestral theurgy. The world seems to have tipped over into a society of control, as conceptualized by the philosopher Gilles Deleuze in the 1980s. Drawing in part on the work of Michel Foucault, theorized in Discipline and Punish, Deleuze uses the term to designate a society in which the administration of individuals “no longer operate[s] by confining people but through continuous control and instant communication.”1 Without even realizing it, reacting to the closed environment of institutional organizations, such as schools, factories, companies, and barracks, we have slowly abandoned our previous practices and ushered in an era of extreme control exercised over the self and others, where the intrusion of artificial intelligence into private life is experienced as normal. Mohamed Bourouissa’s sound piece can be read as a perfect embodiment of Munch’s Scream, which stares you down, expresses terror, jolts you like an electroshock, and stirs humanity awake. This figure, painted by the Norwegian artist known for his tortured expressionism, is summoned by Bourouissa to sound an alarm on the present situation. The sound waves, the laments turned antiphons, vaguely echo an expression so popular that, carried from voice to voice, it fills the streets of Marseille neighborhoods. It is a tocsin that tolls. With boundless subtlety, Mohamed Bourouissa encourages us to become aware of the world as it is.

• Manifesta 13 Marseille, courtyard of the Conservatory of Marseille, Marseille (FR), 2020 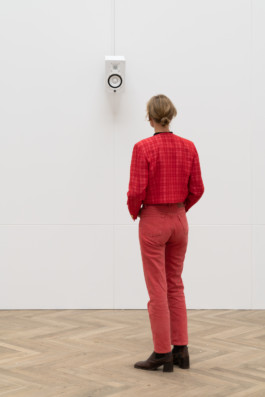 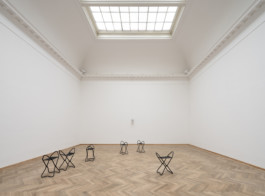 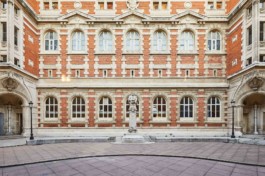 Manifesta 13 Marseille, courtyard of the Conservatory of Marseille, Marseille (FR), 2020