A poker game among pals is narrated on two screens. On the right, a surveillance camera films the room where the players sit down, play, smoke, and talk; on the left, a similar camera is fixed on the room’s entrance in order to show the nosy teenagers who are hanging out outside. These low-definition scenes, which are difficult to read, are interspersed on the left screen with interviews in which protagonists give their accounts of the game. The documentary mode of these portraits promises some explanation, but we remain confused. Who is lying? Who is the boloss, or sucker? Is it us? 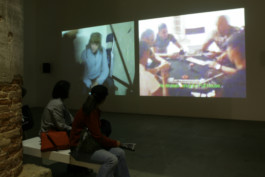 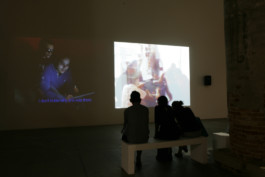